A few members of my immediate family have had a rather inappropriate relationship with street signs. It all started with a stray orange cone, ostensibly left behind from a road construction project. Or perhaps it was lifted off the ground from an ongoing project to be yanked through the window of a moving vehicle. Why split hairs?

The criminal mastermind trio that perpetrated this abduction will not be identified except to say one was the mom of the other two. Let’s call them Beatrice, Jesse and Paula.

The street cone was a proud addition to the family. They all giggled and smirked about their feat of property redistribution. And that was that. No sirens, no escalation of thrill-seeking. Their life of crime may have come to a stop right there, but for a chance circumstance.

The family moved to a new apartment and what should greet them as they explored the large attic above the second floor? Real honest-to-goodness, government-issued street signs! Both “STOP” and “DEAD END” would be displayed prominently on bedroom walls. The latter even appeared in the family’s photo history in a shot of a bleary-eyed friend waking in the top bunk in Jesse’s room. These were joyous times and seemingly innocent since the family had not had to perform any illegal acts. 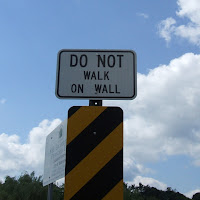 Amusing as they were, these signs began to inspire covetous feelings. Jesse dreamed of obtaining the “Do Not Walk on Wall” sign by the stone bridge across the Chadakoin River. Beatrice and Paula admired a sign they often saw while on marching band carpool duty. One night, they could no longer resist its siren call.

After dropping off the other band kids, Beatrice and Paula looked at each other and knew it was time.

The car doors were unlocked, engine idling as Paula approached the “ROAD CLOSED” sign. The size of the bright white wooden sign was overwhelming. Paula grabbed it off its stand. She was relieved it was unattached, but quickly realized it was HUGE. On end, it was just as tall as she was at a strapping five feet. There was no time to contemplate further as she began shoving and heaving it into the back seat of a Ford Escort. Then there was actually a little more time to think as additional shoving and heaving was required. Was it already mentioned it was HUGE?

Finally, the car doors were shut. Paula was in place in the passenger seat dutifully clicking her seat belt. Beatrice began to drive. It was not long before they realized…the road was closed. “How could we have known?” Beatrice surmised. “There was no sign!”

Laughing nervously, Beatrice turned the car around. It was just in time to pass a police car driving the other way. The other way in this case being…down the closed road. Beatrice remained calm and drove quite sanely away, turn signal blinking, stopping properly at the intersection. Somehow nothing happened. By chance or by design (neither could remember later), the reflective surface of the pilfered sign was angled facing downward and they escaped free and clear.

The thievery ends there, but not the story. The family learned their lesson and went on the straight and narrow, (well, somewhat). Then one day, a few years later, young Jesse had a party. Neither Beatrice nor Paula was around. Yearbook signings indicate the party was a resounding success until the cops showed up. Finding underage drinkers, they searched the host's bedroom and located "STOP" and "DEAD END". Jesse spent a lovely evening in jail and was eventually charged with two counts of possession of stolen property. Ironically, this was for the signs the family did not steal. Fortunately, he was not scarred by this and everyone lived happily ever after.

I remind various government authorities that all of the above occurred in a stormy and tempestuous past. It is a tale relegated to another time and such actions should now be forgiven as outside the statute of limitations. Besides, you can’t prove anything!
Posted by Paminski at 10:47 PM 2 comments: Links to this post

This is an opinion about what the first amendment of the Constitution of the U.S. means to me. I have zero legal experience and my educational basis for understanding the material is one communications law class at Syracuse University and whatever I learned from Mr. Wilfong during my junior year of high school (I learned about kidney stones in his class too. That looked like it hurt!).

Here’s what the first amendment says:

As it turns out, humanity has an endless capacity for debate and also is very good at discovering exceptions to all rules. I’m certain it’s part of our charm as a species. If someone metaphorically tells us the sky is the limit, we still push to go further.

I’ll start with religion. According to the CON (dramatic nickname in an attempt to keep your attention), we don’t have an official national religion and everyone gets to believe whatever they want. Government is all secular and stuff. Sweet!

But then there a couple of things I don’t quite understand. Why are there official national holidays based on religious holidays? Why are religious organizations tax exempt? Why is God mentioned on our currency? Why does a private business catch so much static for selling “Christmas” trees and feel they have to call them “Holiday” trees instead? What about displaying the Ten Commandments in courthouses?

Hm. That’s more questions than I realized and still just the tip of the iceberg.

When I was a kid, it was called Christmas vacation. Now they call it winter break. I say: whatever. It’s become more of a convenient break between school semesters. It includes the New Year’s holiday, which most of the world celebrates by heavy drinking. It really should double as National Taxi Day. It’s really up to individual businesses whether or not to close that day. For government workers, it actually makes sense to leave Christmas as a national holiday since the majority of Americans would ask for it off anyway. Even atheists celebrate it. Whatever the original intent was in declaring Dec 25 a national holiday, it now has just as much secular meaning.

Religious organizations are largely tax exempt in the U.S. Then again, so are a host of other non-profit (but not necessarily non-prophet) organizations. If your group is charitable or educational, you pretty much have a shot at qualifying for tax exemption. It’s an even playing field, so tax exemptions under the CON are a different subject. 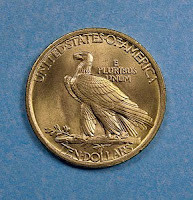 "God” on my money is just not necessary. It doesn’t really belong in the Pledge of Allegiance either. In both instances, it is not the original wording. “In God We Trust” was made the official motto of the U.S. in 1956. The prior unofficial motto was “E Pluribus Unum”, appearing on our cash since the late 18th century. Well, now. This is uncomfortable. It’s like we had this mistress for 150+ years then married someone else we officially gave our money to. Though the mention of God in this case does not really seem to intend support of a specific religion, it could still be a violation of those who choose no religion and those who are polytheistic. It’s an ongoing debate in our court systems. We could just return to the gold standard for our national currency. I sort of like “In Gold We Trust”.

I’m on the other side of the coin regarding religious holiday displays. There is no reason why a private business or organization can’t call their products or marketing materials whatever they want to. They are, in actuality, Christmas trees, intended for use as Christmas decorations. Use them for whatever you like, but that is their main purpose. As for government holiday displays, I restate that Christmas has attained secular meaning as well as religious. It’s cultural and it remains part of the dominant culture in our nation. Other cultures are allowed their own displays for holidays at any time of year. There should be a reason to celebrate every day we live, so get down for Diwali and party on Passover. And, of course, Festivus for the rest of us.

Bear with me, I’m almost done. The last question on my list was the legality of displaying the Ten Commandments in courthouses. A lot of people get upset over this. If they’re taking it literally that this is the law of the land the court is upholding, then I can see why. However, displays as a historical record of an earlier system of law are not far-fetched. The Code of Hammurabi is older, more relevant and would be far more interesting, but not everyone has my impeccable aesthetic taste.

After all those words, it seems like I really haven’t come very far here. The short version: I agree with the Constitution that state-sponsored religion is a bad idea and everyone should worship (or not) however they want. How simple is that?

*Note: Festivus pole image is from www.wagnercompanies.com where said poles may be purchased.
Posted by Paminski at 11:59 AM No comments: Links to this post