Describe your ideal school structure. Don’t worry about how “there is no way to change the system to get there.” Just describe. This is an exercise (like in school).


My foremost concern is options. If I have a child, I want to be able to read “mission statements” or goals of various schools, so I know how they intend to help me educate my child. I want to choose a school that is closest to my values and matches the way my child’s brain works. A dyslexic child is not any less intelligent than others. They just need different learning techniques.

Secondly, I have thought often about the way our govt funds schools. This is generally based on geography and population. Funding is supplied to schools and parents are instructed where to send their kids. If they choose a private school or home-schooling, do they get a tax break? No. What if the funds followed the kids instead of the kids following the funds? I would rather pay my school taxes to the school of my choice as tuition then trust the govt to allocate those funds for me.

Please remember, this is an “ideal” notion. I realize there are plenty of disinterested parents who wouldn’t bother to research and select for their kids. However, a system that allows for options would also still have the public/govt school option. If your kid goes there, you money goes there. Parents choose the school that spends money in the way they want it spent. More art programs in school X? More sports in school Y?

Another point I realize is that many teachers would not like this system initially. It means competition. It means less security based on tenure. It means more judgment based on job performance. The good vs. bad teacher argument would still be a debate. Would a competitive school be one that handed out good grades like Halloween candy or one that made children earn grades? Again, parents can judge a school based on their own criteria. Do I want my kid to have it easy, get straight A’s and still work as a grocery store clerk? Or do I want my kid to learn how anything worthwhile is earned, not given?

Eventually, many teachers may see that a system of choice gives them a choice too. They can apply for work at a tough school or an easy school. They can choose an atheist school, religion-based school or any sort of specialization. Schools compete to hire the best teachers. And what if there are school types we haven’t considered?

This next bit is purely from my imagination. Consider a neighborhood school. Say there are ten households in a small neighborhood. Not every household has children, so let’s put the number of school-age kids at 15, ages 5-18. Either one adult has a certification to teach or one is hired from outside the community. An assistant is also hired. Could one teacher plus one assistant efficiently teach that many children in a homeschool type technique? Would the neighborhood parents provide a traditional or alternative classroom setting and be willing to pay that teacher and an assistant to educate those children? Maybe not, but change the parameters. One teacher with seven kids? Three teachers with 30?

This has become long-winded and wanders a little into unknown territory. I don’t suggest that my ideas are the best. I only suggest that there are more ideas than are currently being considered and some of you have them. Do as you ask your students and children to do and exercise your brains to invent solutions. Maybe those same students and children can even contribute some ideas.
Posted by Paminski at 11:21 AM 1 comment: Links to this post

“Mom, I think I just swallowed a quarter.”

These immortal words were uttered in 1986 (or maybe 1985?) by a young girl describing a most unusual situation.

But let’s back up just a few minutes to see how the event unfolded.

The scene is a kitchen in the early evening. The fourteen-year-old is sitting in a chair at the kitchen table. Mom is on the phone. It’s a rotary wall phone in a lovely shade of mustard yellow. No one remembers who Mom is talking too, but all agree on the level of impatience in Girl’s general attitude.

“C’mom, Mom. When are we going?” the youngster questions repeatedly. The plan was to go to the mall, always an exciting time in a teenager’s life. But Mom’s conversation just seems like it will NEVER EVER end. Girl does what all kids do. She gets pouty. For some reason, Girl has two quarters in her right hand which she is rubbing together as if to start a money fire. Her left arm is across her body in “arms crossed” position. Girl leans back in her chair resting on the two back legs. She ignores all conventional wisdom about the germs on coins and sort of bounces said coins off her bottom lip. Girl loses her balance. Girls’s chair slides forward to its intended position of all four legs on the floor. One of the quarters Girl is holding slides straight back down her throat. 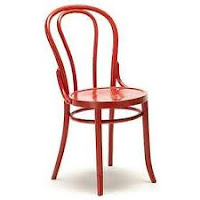 Put a white cushion on it and it's the spitting image of pure evil.

Now don’t get crazy. In the above flashback, Girl had no trouble breathing and was not in any immediate danger. However, the quarter did come to rest in a fixed position. Average human throat diameter is about one inch (possibly less in an immature female specimen). The diameter of a quarter is about ¾ of an inch. For reference, the quarter was stuck about halfway down the front of the neck.

Girl was quick to identify the issue to Mom. Mere moments later, the quarter scraped its way down to the base of the neck. Since Girl did not exhibit the universal sign for choking, Mom wrapped up her phone conversation normally before hanging up. By then, the quarter had settled squarely between Girl’s breasts and refused to budge. 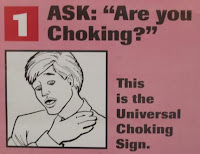 After being admitted to the emergency room, it was x-ray time and also the beginning of something more. An orderly gave instructions on positioning and listened to the story of how this odd event had happened. His comment?

“That’s kind of hard to swallow.”

The next part of the evening was a nightmarish blur. The reason for that was drugs. After reviewing the x-ray, a doctor decided the quarter had to come out the hard way. If it didn’t fit through the esophagus, it was not going to go quietly through the small intestines. Two substances were administered. One was Demerol. This immediately relaxed all of Girl’s muscles and the quarter dropped into her stomach. The doctor announced the stomach would now need to be vacuumed and provided the second drug. Girl did not catch the name of it, but it was a viscous liquid that numbed the throat on contact. Have you ever tried to swallow with a numb throat while on a mind-altering drug? Girl would advise against it.

At this point, Girl became disoriented. She did not know if she was swallowing or not, but she tried real hard. Apparently that worked because she had to swallow a crazy-big suction tube. The device pushed air into her stomach forcing her to belch. Then the suction would grab stomach contents and deliver them to the waiting doctors. It seemed like it took hours, but Girl had a skewed concept of time at that point.

At long last, the quarter was retrieved and there was much rejoicing. Mom took Girl home. Life returned to normal. Mostly.

Let’s fast forward a few days to the weekend at Dad’s house.

Girl is getting in Dad’s car to go out for ice cream/dinner/something random.

Dad says, “Wait a minute. I forgot something.” Dad goes back into the house and then returns.

Dad says, “Here. I brought you something.” He drops an object into Girl’s waiting hand.

He says simply, “Snack,” as Girl observes the quarter in her palm.

In addition to a year’s worth of flashbacks where Girl’s throat would suddenly go numb, Girl’s family was also relentless.

Mom, Brother and Girl are passing a vending machine. Brother starts searching his pockets before asking Mom for money. Mom says she doesn’t have any cash.

Brother asks Girl, “Hey, could you cough up some change?”

Fortunately, Girl saw the humor in the situation and was glad to provide her family with a bountiful supply of one-liners. And yes, she still has the quarter. 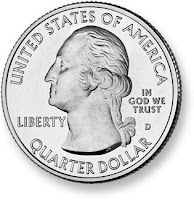