We were Jewel's fourth home.  She'd really got around even at just one year old.  But we knew she was staying with us as soon as she came in the house.

Supposedly, Jewel was a purebred Egyptian Mau.  I am skeptical about the breed background of most cats and no exception here, but she did fit the bill.  Green eyes, the tabby "M", a ticked pattern, nearly waterproof fur and the extra skin flap with long back legs.  Then there's the spots.  Yeah, not so many spots.  So her first home was probably not a meticulous breeder.

Jewel's second home was with a woman and another cat.  She did fine there for a time.  But the story I heard was that the woman's boyfriend abused the cats.  Then the boyfriend decided it was ultimatum time, it was the cats or him.  The woman chose him.  It seems crazy since people that abuse pets often also abuse other people.  I hope she did all right.

A lady she knew took the cats.  The lady brought them to her daughter's house who already had four cats.  All the cats were indoor/outdoor there. 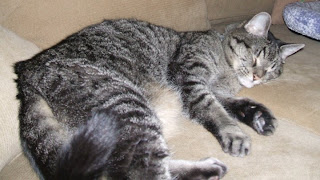 This is where I come into the story.  The daughter of the lady that rescued the cats was a co-worker.  Our year-old cat needed a companion.  Mostly we just hoped the cat we already had would stop biting our fingers and toes at night and play with the other cat instead.

I was supposed to be looking at a different cat, but once I arrived I could see the owner was kind of attached.  And there was Jewel, frightened low cat on the totem pole that had no interest in going outdoors.  How could I resist a poor little feline that waited to sneak in and eat last so the other cats wouldn't threaten her?

On the way home, Jewel showed a lifelong habit for the first time.  She pooped in her carrier.  After a quick stop to remove the odoriferous object, we continued on.  She was cautious as she was released into the wilds of our home, but got along with the resident cat, Pandora, very quickly.  There was no doubt she had found her place.

Over 13 and a half years, Jewel put up with a lot.  We added a third cat, Miranda, that became her faithful sidekick.  Then I began fostering cats for a rescue group, so there was often an extra adult cat or a whole litter of kittens staying in the guest suite (second bathroom) or strolling around. 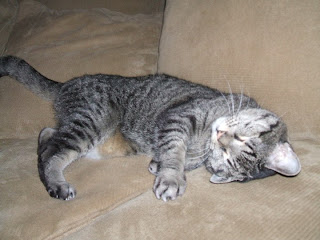 A few years ago, Jewel was diagnosed as hyperthyroid.  It barely slowed her down.  When I called her, she would come and take her medication without complaint.  It's a pretty rare thing to shove medicine down a cat's throat twice a day and still retain your skin.  Last year, she developed a liver tumor.  It was just not feasible to remove it.  She only had use of about a quarter of her liver.  We added a supplement to her diet and hoped we'd know when the time was right to let her go.

Today was the last day that I got to hold my cat.  I'm going to miss her badly, but I know it was the right decision.  She was worn out and wobbly.  She still had the energy to crawl on my lap, but I could see it was only a matter of days.

Everyone that met Jewel thought she was amazing.  No one more so than I.  The vet's office provided a clay impression of her paw for which I am grateful.  I don't need a memento to remind how wonderful she was, but it gives me something tangible.  I may not be able to touch her, but I can trace a paw print and think about my love for her. 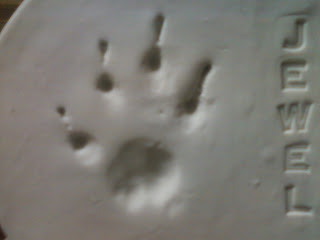